In previous manual we saw how to make normal attacks. Now we are going to see how to make fakes attacks (multiple attacks) automatically. Fake attacks allow you to send same troops to all villages of a target player at the same time automatically.

To make fake attacks you have to click “Fake” tab, see red arrow in the following screenshot: 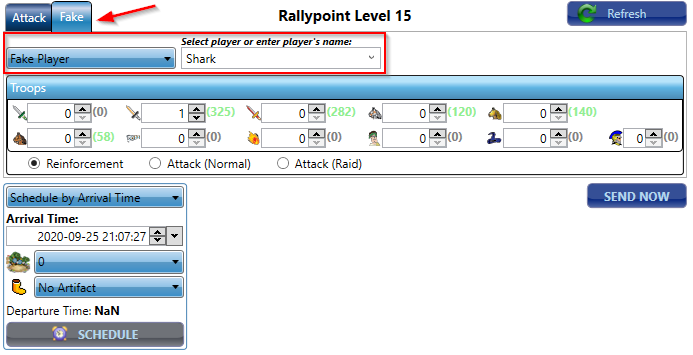 It is similar than doing normal attacks, the only difference is the target to select.

You may select one of the players in the dropdown list (a list of already attacked players) or you cant enter any player’s name even if it is not in the list. This travian bot tool will find the player automatically and will send same troops to each one of the villages owned by the player.

The rest of options are identical to normal attack. You choose number of units to send as fake, sending type, catapult options if any and you decide if you want to send fake attack immediately or later by pressing “SEND NOW” button or “SCHEDULE” button respectively.

Spy all villages at the same time

It’s very helpful to know what your enemy has in his villages in certain moment, so you would like to spy all his villages at the same time. You can use this feature to do this very easily, just set number of spies and select “Attack (Raid)” to make scout options to appear.

Just that easy, the bot will send the same number of spies to all villages owned by target player.

Now you are ready to confuse players (fake) and spy all his villages at tha same time.