Send by Percent route type is one of the most powerful and popular route types that we have in TCommander Bot. It has been proven that sending resources to another village by fill percent of warehouses/granary is much more effective to manage the resources among your villages. That is why this type of route can be used for many purposes.

You can use this route type to send resources to other villages before source village warehouses or granaries get full. This way you avoid your mines to stop producing resources due to lack of capacity in warehouses/granaries.

You can use Send by Percent Route also to supply smaller villages to send resources before its warehouses/granaries are about to be empty. This way you can ensure that none of your own villages are lack of resources by always keeping warehouses and granaries over certain % full.

Actually, Send by Percent route is a multi purpose route that can be used to support anything to destination village. You can set any % to satisfy your needs in any of your destination villages: support buildings constructions, support troops training, etc.

How to use Send by Percent route

This route type works only to send resources among your own villages.

“Destination” field displays a dropdown list with all your available villages to select to send resources. You can optionally change “Route Type” dropdown list to select another route type.

So, we have two conditions to send resources by percent:

If both conditions are met at the same time, the bot will send resoures. 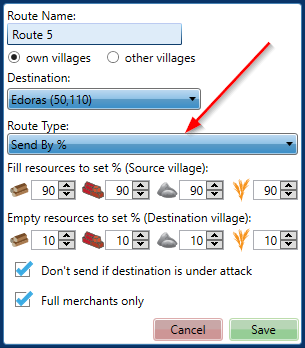 Here you define the % of each resource that you do not want to exceed in source village. Default values are 90% for lumber, 90% for clay, 90% for iron and 90% for crop. This means that Marketplace Automator will try to keep your warehouse/granary not to be over these percentages. If current warehouse/granary percentages is over the set percentages, Marketplace Automator will try to send the extra resources to destination village.

For example, if warehouse lumber fill % is 92.4%, Marketplace Automator will try to send 2.4% lumber to destination village to keep lumber 90% in warehouse. The same condition is applied to clay, iron and crop percentages.

Here you define the % of each resource that you want to always keep in destination village and not to be under those %. Default values are 10% for lumber, 10% for clay, 10% for iron and 10% for crop.  If current destination village´s warehouse/granary percentages is under these percentages, it will try to send resources to reach those % again.

For example, if we set the sample like Figure 1 above.

After calculating the amount of resources to be sent, it’s possible that the bot only sends a portion of it or don’t send any resources at all. Pay attention:

travian bot checks if there are other resource shipments under way to the same target village from different source villages. It’s possible that the total amount of resources being sent from other villages already fills the target village, in this case the bot will not send any resources from current route to avoid overfilling target village and do not lose resources unnecesarily.

This resource calculation improvement is made to avoid losing resources unnecesarily when sending resources from many villages to the same target village.

This way you can setup many villages to feed capital, for example, and each source village will send resources when they are available and you will never lose resources for overfilling target village warehouses.

This logic to check other shipments from other sources is done for other route types too.

Available options for this route type

When all requirements to send resources are met, it sends calculated resources and route becomes green in routes list, see image below: