Supply Buildings Queue Route helps you to keep your villages buildings under construction all the time. Imagine your empire will never stop building new buildings due to lack of resources. That is the purpose of this route type, to help you to distribute resources among your villages to continue building and growing your infrastructure 24/7 non-stop.

Supply Buildings Queue Route becomes available only after you have more than one village in your account. This route type makes sense only to send resource to your own villages.

To Supply Buildings Queue Route you only need set 2 parameters: 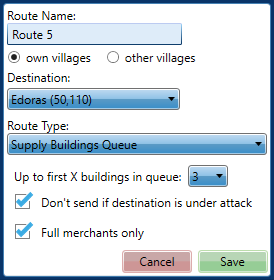 That was very easy!!

So the bot checks if destination village is lack of resources to build next building in queue, see red message in image below: 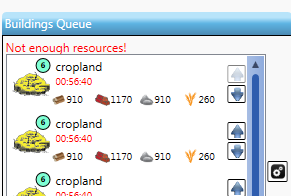 If this occurs and source village has enough resources and merchants, Marketplace Automator calculates how much resources are needed to help buildings construction and will try to send as much resources as possible.

For example: Let´s say that you set “Up to first X buildings in queue” to 5.

This way we can ensure to send always as much resources as possible to meet or goal and reduce merchants traffic. Also this feature lets you build buildings even faster because you will have resources available in less time.

After it sends the first resources shipment, it will not check the need of resources in destination village until merchants are back to home.

After calculating the amount of resources to be sent, it’s possible that the bot only sends a portion of it or don’t send any resources at all. Pay attention:

travian bot checks if there are other resource shipments under way to the same target village from different source villages. It’s possible that the total amount of resources being sent from other villages already fills the target village, in this case the bot will not send any resources from current route to avoid overfilling target village and do not lose resources unnecesarily.

This resource calculation improvement is made to avoid losing resources unnecesarily when sending resources from many villages to the same target village.

This way you can setup many villages to feed capital, for example, and each source village will send resources when they are available and you will never lose resources for overfilling target village warehouses.

This logic to check other shipments from other sources is done for other route types too.

Now with travian bot you will be able to support smaller villages that need resources to grow faster.

You landed this page searching any of the following keywords